The museum is situated 80 km from Prague in the heart of Český ráj (Bohemian Paradise), 500 meters away from the castle Trosky. You will find an extensive exhibition of more than 2,000 items representing the development of dolls and teddy bears since 1840 to contemporary artistic production. The museum is built in a rural style which resonates with the local landscape and with the village of Troskovice.

Many dolls were awarded at various exhibitions and competitions, there are also displayed other rarities. The museum also in-cludes a neonatal ward, where is a large number of unique dolls – OOAK, silicone dolls and reborn dolls.

The purpose of the museum is to explain to the public that the notion of doll can express something else than a mere item intended for children's games.

The museum was already much publicized in newspapers and magazines in the Czech and international television.

In addition, you will find many teddy bears, strollers and other historic items.
Due to its unique extent, the exhibition will make impression on visitors of all ages regardless of gender.

Museum opened to the public:

"The doll was born to live in us.
She gave joy, love, happiness,
feeling that one is not alone.
Love her and discover there is
more than a memory of childhood.
Get to know her and accept all,
what she so generously offers.
Together with us promote her
more than mere child's toy “

Museum was founded by Nada (52 years old)  and George (56 years old) Simek in 2005. Nada is interested about dolls  more than thirty years. She graduated from art school, her interest is painting, photography, history of art. Dolls fascinate her in terms of historical and art.

She is the mother of four children - two daughters and two sons and now works as the director of the Museum. Dolls are her work, love and hobby.

She loves antique dolls, but also modern designer dolls produced by artists from around the world. She and her husband spend much time at international exhibitions and fairs. They have recently visited the Toy Fair in Hong Kong and INDEX Doll Show in Orlando.

Antique exhibition exposes a lot of very rare dolls with porcelain heads of the French and German production,  cloth dolls Lenci and  Käthe Kruse, unique  French boudoir dolls,  celluloid dolls  Minerva  and Schildkröte ,unique bronze molds for  making dolls and much more. The historic exhibition is divided according to the materials used to produce of dolls.

This allows children to see dolls with which to play their grandmothers. Not all dolls were intended for children's play. They have served as a decoration castle interiors.

The room, which is arranged as a newborn separation in the hospital are silicone babies by Romie Strydom,  Claire Taylor, Selena Saxton, L.M.Sands, Julie Molloy, Michele Fagan, Birgit Gutzwiller, Rita Rich, Melissa McCorry and display of reborn and OOAK  babies by Donn Lee, Helen Jalland, Selena Saxton, Denise Farmer, A.R.Herrington, Stacey Haskins, Sylvia Jantzen… We also  exhibit portrait dolls modeled unique of cernit. We have  design doll of Albert Einstein, daughter of the most popular Czech singer Karel Gott, U.S. President's daughter Sasha Obama, Grandmother with grandchild, All of these modeled dolls are of course only one an existing  pieces on the world.

The big attractions are police dolls. It is a demonstration dolls boy and girl, which are used during the interrogation of children and it is patent Czech criminal police. As the only institution in the Czech Republic. We obtained approval of the Police Presidium in Prague publicly expose these dolls.

There are dolls teaching tools for medical care and and teaching on the the Child Care from the very oldest to the most modern version of the robotic doll made in Japan.

The museums exposure nicely complement the historical toys and prams made from 1860 to the modern designer. There is a pram with a gilded handle fourteen karat gold. This pram was ordered for  Sheiks baby to Arab Emirates.

Exposition is regularly changes annually. The new exhibition is always prepared one year in advance. It often happens that someone gives us their unneeded doll. We are especially thankful for the historical dolls and bears made within a maximum of 1950.

Each year visit the museum several hundred tourists from around the world. The surroundings of the museum is very interesting. It is in an area protected by UNESCO. Here is a beautiful nature and large number of castles and chateaux.

Of course, Museum  has its problems also. The biggest problem is the increasing cost of energy and capacity of building. Existing building area 1000 square meters is insufficient for exposure, depositary, office and and flat for museums manager.

Museums management is considering to accept a lucrative interesting offer on long-term hosting exposure in abroad.

Now the museum is still in the Czech Republic and looks forward to your visit.

Dear lover of dolls, if you want, we can dream together.

The Castle Sychrov - Special event of Museum: "The little man Dwayne" through the eyes of famous world artists.

Infant Jesus of Prague by famous artist Mayra Garza in our museum. 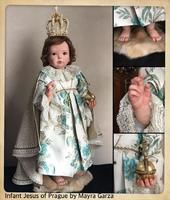 The author of Princess Charlotte visited our Museum!

Something new for kids 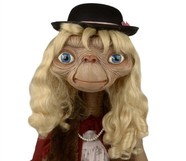 Dolls of Museum exhibits dolls of artists from around the world! 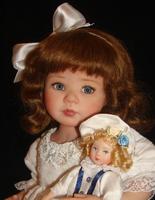 Fairy tales in our museum 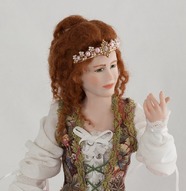 Consecration of art doll at the State Castle Sychrov

A popular Czech actress Anna Kulovaná from the popular TV series Medical Office in the rose garden visited our museum. Anna with her newborn daughter and art doll boy by Claire Taylor. 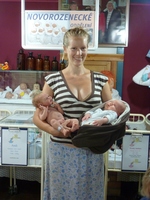 Fairy tales in our museum

We announce with a great pleasure that our museum has acquired a magnificent fairy-tales themed collection of work by Roxanna Maria (www.roxannamaria.com). The collection without doubt resonates with the picturesque region of Bohemian Paradise where was shot a number of fairy tales movies and which is a place of a fairy-tales festival. In connection with displaying this exquisite collection, we also announce a competition for all doll lovers and admirers of our museum. Read more! 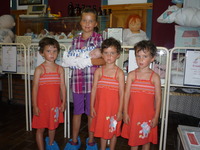 Our visitors  Triplets and grandmother / 88 years / were excited about visiting the museum. 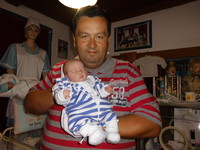 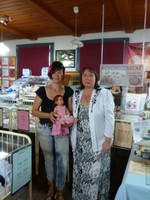 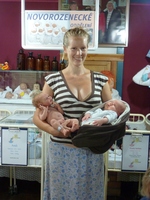